One of the biggest learning curves I’ve had bringing Khaleesi into the endurance world has been her hoof program.

It seems the question I get most often by riders and the general public alike is:

Is your horse wearing sneakers??

And the answer is

So I dedicate this post to the question of: 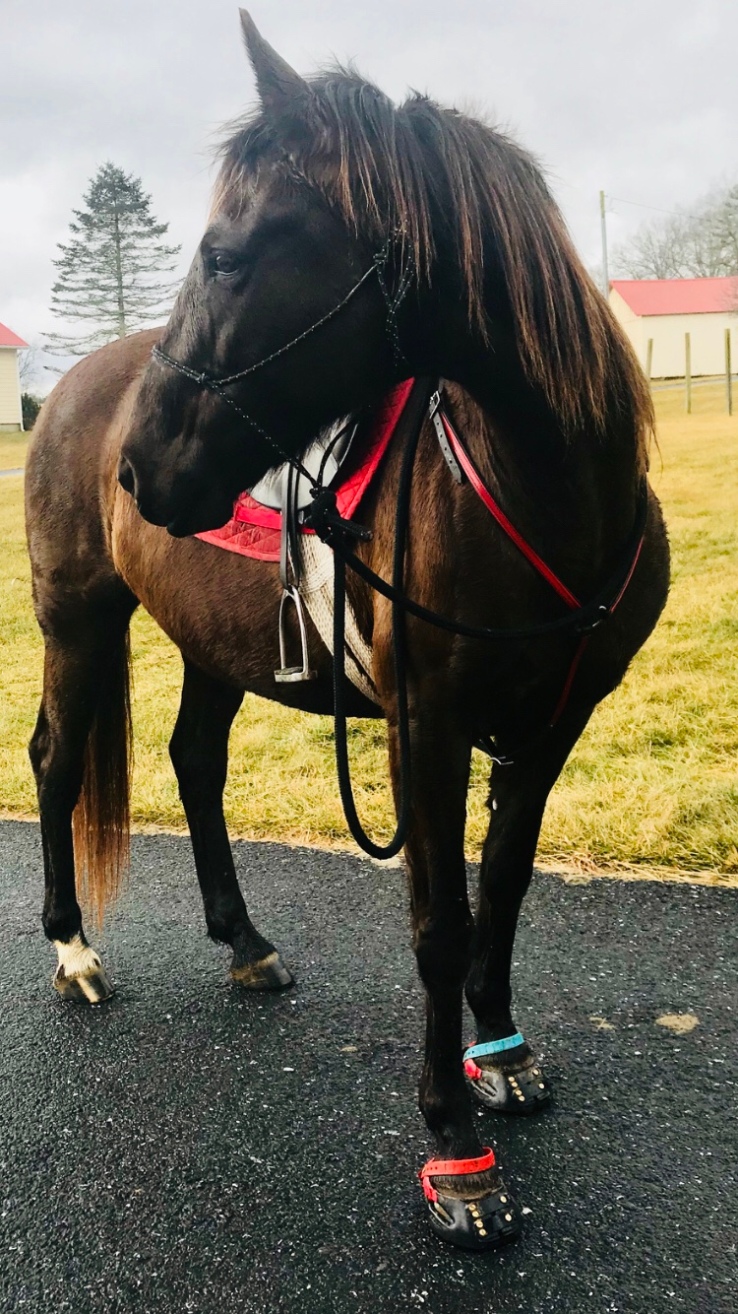 What exactly are hoof boots and why do you use them?

Most horses in regular work of any sort need some kind of hoof protection.

Even though hoof material is generally tough, horses can get sore feet due to genetics or improper care; and those who don’t struggle with tenderness can still wear down their hooves over time depending on terrain unless they are in very light work.

For centuries humans have dealt with this issue in domesticated equines by using metal horseshoes. Most people are aware of horse shoes even if they’ve never owned a horse. So once they see my horse does not have metal shoes they are curious as to why not.

My personal experience with Khaleesi who came to me as an unstarted 4 year old barefoot and roaming with a semi-feral herd on a massive farm in varied terrain, was that she would slow over any hard or rocky terrain which made it obvious to me her feet were sensitive even when ponied without a rider.

When I began to ride her more, I had to protect her feet that were sensitive to rocky terrain. I liked the idea of staying barefoot so I began to experiment with hoof boots.

Hoof boots are removable just like your own gym shoes so she could live barefoot in the field most of the time and for the few hours I rode her she would have her feet protected. It seemed like a perfect situation.

As horse owners are learning about the negative affects of metal horse shoes hoof boots are becoming more common and there are more hoof boots on the market today than ever before. I tried a couple different styles and no matter what I did with sizing and fitting and tweaking advice from the representatives they would not stay on reliably so at the time I gave up. 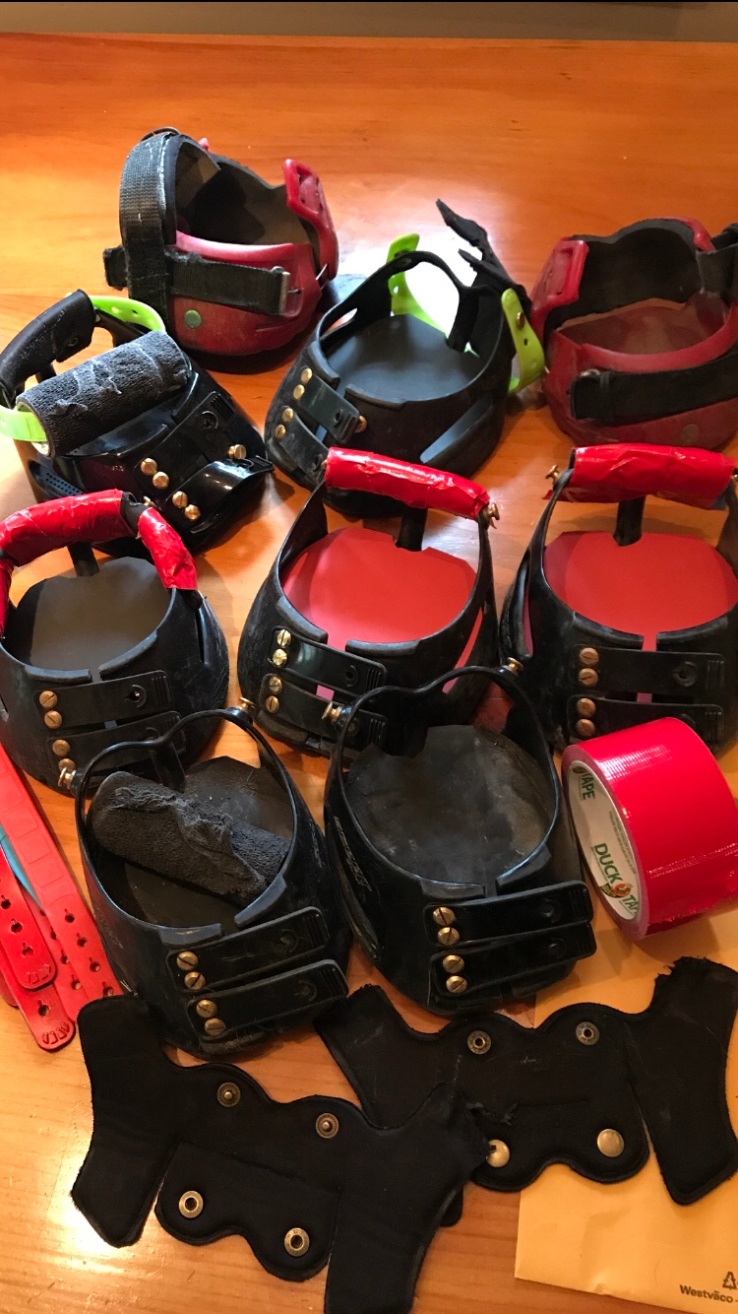 My farrier assured me that once I went with metal shoes like the majority of horse owners, my horse would move better and I would have less problems- so out of frustration and impatience I had him put on a set of metal shoes and began to compete in endurance riding.

At first she seemed to do better- but she was still sensitive on rocky ground, my farrier recommended adding pads to the shoes.

This also helped at first, and then when she was still struggling in shoes and pads- and had a serious abscess just before a 50 mile event I began to question if this was truly the best route.

It was our first 100 mile entry just over a year ago that we lost a shoe on mile 4 which really tore up her (now weakened) hoof. Though I could have had the ride farrier recreate her hoof with synthetic materials and put on a new metal shoe I knew in my gut that was only continuing to go the wrong direction for my horse so I decided to option out of the ride and go back to the drawing board. I knew that the metal shoes were weakening the hooves over time. I could see it.

Most recent photo I have of her feet from April 2017. Today almost 4 months later they are even more improved.

The more I searched, the evidence became clear and fell in line with my personal experience, for the most part metal are an easy quick answer for most but over the life of the horse do more harm than good. I believe now that many horses are successful in spite of metal shoes, not necessarily because of them.

There was a time when no other options were available and nailing on metal shoes were the only possibility. Yet technology has come so far in our world it seemed unlikely to me that we couldn’t do better than thousand-year-old hoof technology.

The hoof and frog play a part in pushing blood back up through the horse’s legs and when a metal shoe and metal nails stop the ability for the hoof and frog to expand and contract like a pump as they walk, the blood flow decreases, which will over time diminish the strength and health of the hoof as well as the legs. 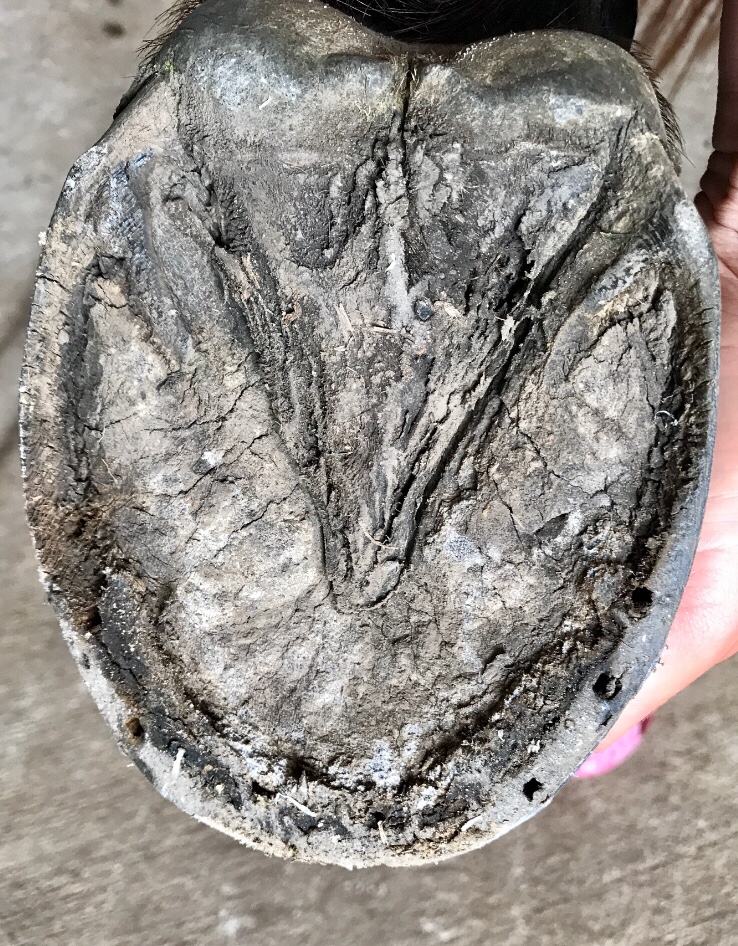 Frog and sole right after removing shoes and pads June 2017

There are other issues such as the ability of the horse to feel varied terrain and learn to move through it with less injury. Shoes and pads can allow the horse run through rocky terrain but at what cost? Over time there is less blood flow, less feeling, less acute proprioceptiveness, and poorer hoof quality. This can lead to injury from stone bruises, abscesses and tendon damage as the horse has less ability to navigate the footing naturally. I saw this happen in my horse and those around me in the endurance world.

Other advantages I’ve found using boots vs. when we had metal shoes are:

By the time I was serious about going barefoot because I was finally out other of options, I’d found Scoot Boots and had success with them on the off season. I began to read more information on their website and blog about how to help build a healthier foot. I parted ways with my farrier (who I really liked and still do!) and found a barefoot trimmer who taught me the basics of how to begin taking care of my own trimming. I took more seriously the nutrition aspect and changed my feeding program. 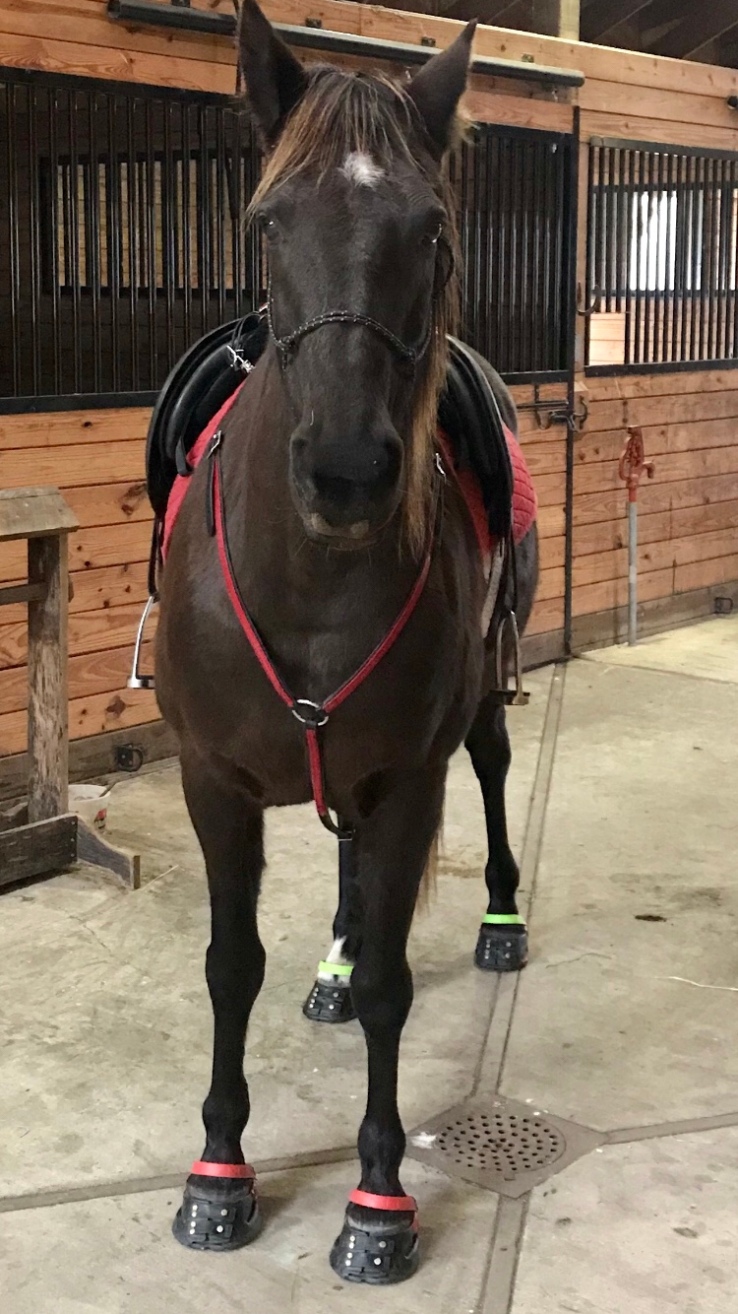 Over the year of rebuilding a better hoof, I learned patience in allowing both the hoof to regrow stronger and to gradually but purposefully condition the hoof to varied terrain. Thankfully the Scoot Boots now were working for my horse where the past other boots had not stayed on. They stay on for about 90% of my riding with most training rides (often up to 20 miles) having no issues at all. Last Fall I completed a rocky 50 mile endurance ride with my Scoot Boots and they worked brilliantly!

Even more exciting to me was my last 50 that has little rocky terrain but miles of muddy trails. I did the majority of that ride completely barefoot coming up sound at the end and would have never imagined that possible a year ago!

Basically before I ride, I pick up my horses’s foot, pick out any dirt and rocks as usual, then slide on the hoof boot. Once the foot is back on the ground I secure two rubber toe straps and a pastern strap over a metal knob hook. It’s that simple.

The things I appreciate most about Scoot Boots that I find unique from the boots I tried previously are:

As of now I don’t foresee using metal shoes again but I also know enough to never say never. Putting on a set of shoes for a ride and removing them within a week or so would not do enough damage to preclude the possibility in the future- especially for a 100 and also with the interesting options for non-metal shoes (NGs, epona or easyshoes).

For now my trimming learning curve appears to be working for my mare, the Scoot Boots are staying on reliably enough to complete 50 mile rides and I’m able to feel better about not forcing my horse to go along with a process she tried to tell me was not good for her for a couple of years and that matters a lot to me!

A few misc extra notes about hoof boots I’ve picked up in the past year: 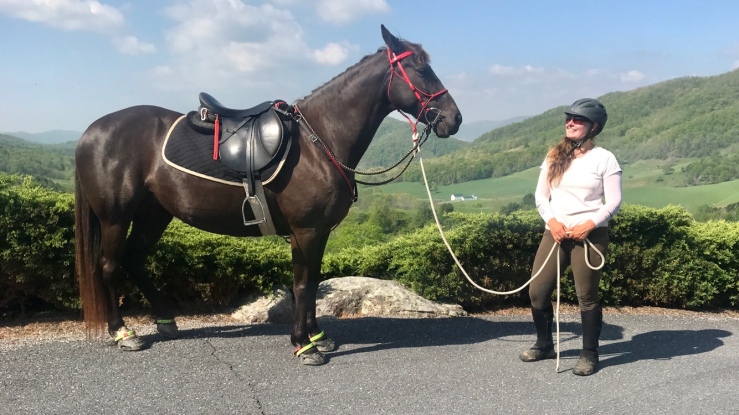 After months of using Scoot Boots successfully, competing in them and corresponding directly with the company regarding fit, use, modifications and other accessories, Scoot Boot became a sponsor of greento100 and my endurance riding. They send me products to try and give feedback and now supply Khaleesi’s boots.

Violin teacher and endurance rider living in a rural mountain county - one of the least population dense and without a single stoplight. View all posts by JaimeHope