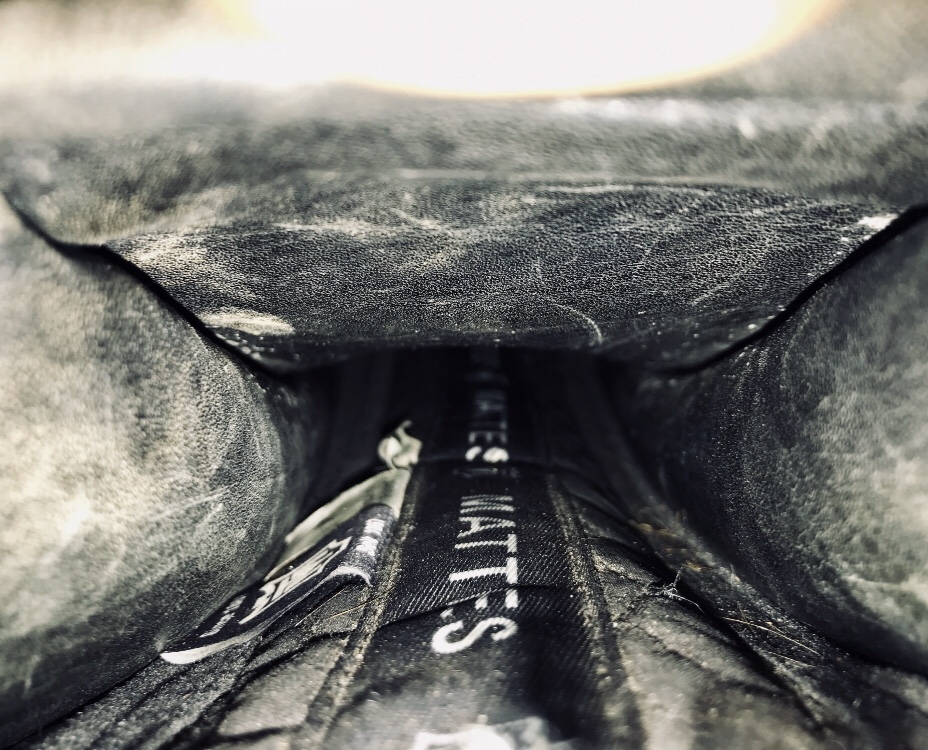 I’ve been working through a saddle fit puzzle this season.

There have been rubs and some white hairs developing and as I adjusted saddle pads and shims the rubs moved around… through occasional the uneven sweat patterns and roughed up hair – her back wasn’t sore.

Regardless I knew something wasn’t right. After the season ended I had her looked at by my bodyworker and found that she was severely sore in the shoulder area and though her back wasn’t sore along the topline she was contracting and not able to move optimally. It was serious, and she told me my saddle was too narrow in the front.

Knowing that wasn’t possible I brought out the saddle which is a Balance 8x GPJ and an unusually wide saddle for the purpose of allowing the maximum movement. When she saw the saddle we talked about my set up and it became clear that somehow the front of the saddle was still pressing down onto the shoulders as if the saddle was too narrow.

Verdict: you’ve got a saddle problem… a serious one.

After spending so much time assessing, puzzling, considering, trial and error over the season… I finally surrendered.

Maybe the saddle is just too wide and there’s no way to keep it off her shoulders. I love the saddle and I love the concept- so I got in touch with the folks at Balance for some input if a 7X (the next narrow) might be an option.

The company sent me instructions for a full consult and after uploading dozens of pictures and videos in and out of tack the answer came back better than expected: The current saddle I’m using indeed is a fit.

However it’s not working for a few reasons and L at Balance could explain why if I could take some time for a phone call.

I’ll share some of the basics of what she helped me with. Though everyone whose owned a horse has at some point struggled with saddle fit, each case is unique to the horse, saddle, rider and discipline. Maybe some of the pieces in my puzzle will help others as they sort out their own puzzles.

There are certainly things that one can get away with in more casual riding or shorter sessions in an arena that the amount of distance and varied terrain I cover for endurance training will not allow for. There is little room for tack errors in our sport.

First there is a delicate balance between pressure and friction. Friction is the most obvious: missing hairs, white hair patches, roughed up fur, rub spots- these are from friction. I had been dealing with signs of friction and as I adjusted my saddle set up and pads the friction areas would move and change; Khaleesi didn’t have a traditionally sore back. Friction, though needs to be addressed, is less damaging in the long term than pressure. Pressure basically squeezes the blood out of soft tissue and over time creates deep tissue damage and atrophied muscle. You can solve a friction problem with pressure- if there’s enough pressure on the saddle and it basically sits on the horses back often how people have traditionally thought a saddle should fit- it will likely not move and you have no friction. However over time you starve the muscles of blood flow and eventually can shut down the movement in the back. This is a problem, but many people never even realize it. It becomes normal and their back looks just like the saddle panels… in fact the saddle appears to fit great… never moves… very stable.

Thankfully along her topline I had friction (which I would like to solve) but not pressure. However I did have pressure in the shoulders and near the withers.

Friction causing white hairs on the top line while ‘good sweat pattern’ in the shoulder area is where the pressure was coming down.

The saddle is extra wide in the front. The design is intended in the right circumstances to encourage blood flow and good freedom and range of motion. The company has specifically constructed pad options to help horses in different stages of development from past atrophied muscles or underdeveloped muscles from being out of shape. 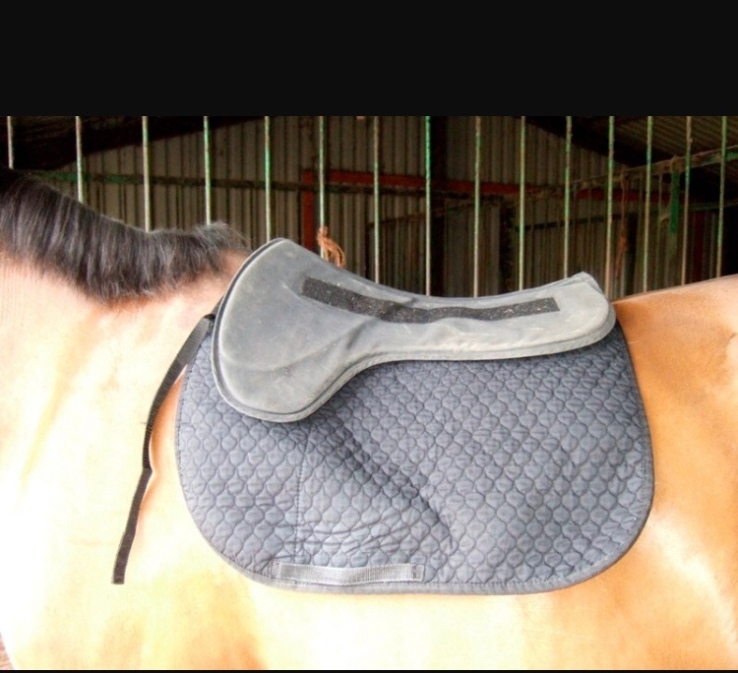 I was using a similar half pad system in shape- but the pressure came from the material. The pad I was using had felt shims where the balance half pad is constructed from a closed cell foam which is designed to allow movement and blood flow (“squishy”) yet with enough structure to return to its shape immediately – so it immediately gives support where it’s needed. The felt doesn’t have give so though I was able to add structure, the saddle pressed down making the effect of it being narrow. 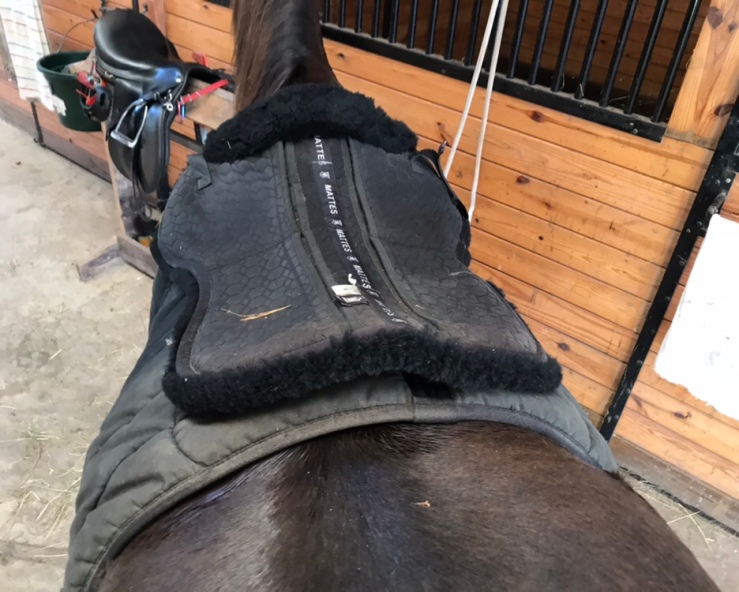 My mattes shim half pad that uses felt inserts

I will also add what they call a JB pad which is about 8” wide and will sit back a few inches from the front of the saddle. This “shim” will fill in any gap in her topline behind the wither that’s been created from the pressure on the front end hindering her movement and it will lift the saddle very slightly in the front creating a couple inches where the shoulders can now move freely again.

Adding to the destructive spiral has been my riding.

Due to my concern about the front end of the saddle pressure, I’ve done my best through the season to get off her front and encourage her hind to engage and front to lift. L saw the problem in the video footage- I’ve been staying too upright in the posting trot. Though I thought I could keep my weight and balance off her front, what really happened is I ended up pushing down more on the front. This explains why the problem continued to get worse the more I tried to fix it.

First it’s hard to post up and down staying so upright over my feet. This means that I had to engage more tension which hinders her ability to move… Second it makes sitting back into the saddle gracefully almost impossible. Third this way of moving also put all my weight into my stirrups as I rose above them. This weight in the stirrups pushes the front of the saddle down onto the withers and shoulders making the horse more heave on the front end. As the pressure builds in the front end and shoulders from the felt half pad with no give pushing out the blood flow and compressing the soft tissue, Khaleesi gets more and more narrow during the ride which pushes the saddle down farther and creates a very bad cycle. Thus the saddle at the end of the ride is sitting very differently than it did in tacking up before the ride.

L helped me by talking through sitting and standing in a wooden chair to sort out a better way to counterbalance my upper body forward slightly in order to take weight out of my feet. She mentioned being careful not to go overboard because many riders get out of balance too far forward (which I have also done in years past and have now overcorrected).

I didn’t realize that you can make a horse heavy on the front both by leaning forward and not leaning enough forward! But after some experimentation it makes sense.

With a few simple base pad changes and some attention to my riding balance and counterbalance she thought the problem should go away. Having the closed cell pad should also give a better fit to help with the friction issues but I know that the weight in my stirrups was creating too much movement in the saddle and this all makes sense from my experience riding.

Last she suggested less bulk in my stirrup leathers could be helpful in my particular situation with this particular horse. She suggested switching to ‘T-bar” or “A web” stirrup leathers that attach to the stirrup bars with a loop and then are adjustable at the bottom of the stirrup which also has no metal buckle under the seat. That’s an inexpensive and easy adjustment as well and a pair of those are already on order. 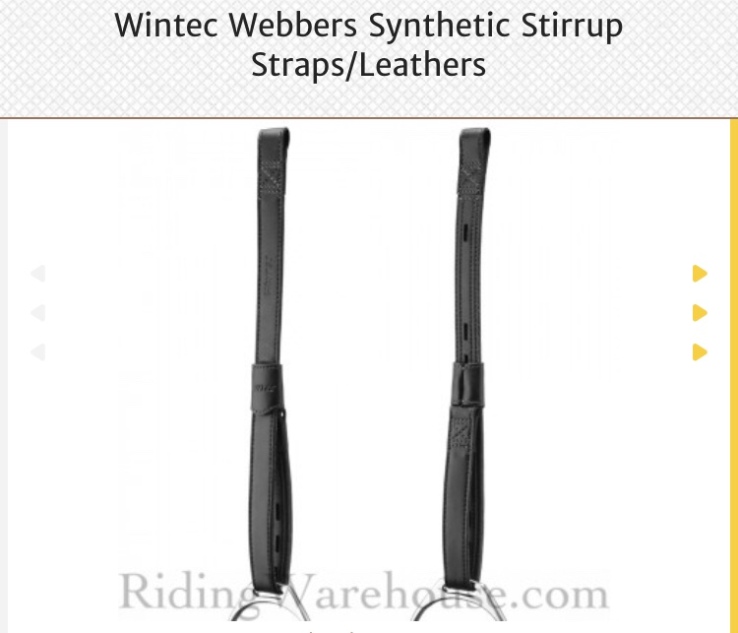 The depth of layers the representative from Balance went over in collecting data both static and in motion, with and without saddle to see how my horse moved and how the saddle was functioning for the horse and the rider was beyond what I expected – but exactly what brought me to such interest in their saddling concept.

L also gave me some ideas to experiment with and I appreciated that she encouraged me to use my horse to determine what works and what doesn’t. As I try shifting weight around and the way I post or sit will become clear through how my horse responds and she suggested keeping what makes a positive shift and letting go of habits or ways of carrying my body that bring negative feedback.

Thankfully I have a mare who will let me know just what she thinks!

Violin teacher and endurance rider living in a rural mountain county - one of the least population dense and without a single stoplight. View all posts by JaimeHope